Among the many accolades and awards Lalgudi Vijayalakshmi has earned in her journey as a musician, there is one she holds close to her heart – a compliment from Bharat Ratna Pandit Ravi Shankar, who was the guest of honour at her performance at the Indian Fine Arts Academy of San Diego, United States, in 2015. Following her performance, Panditji offered his blessings, took her hands into his own, and said “You have your father’s fingers. Your music has touched my soul.” 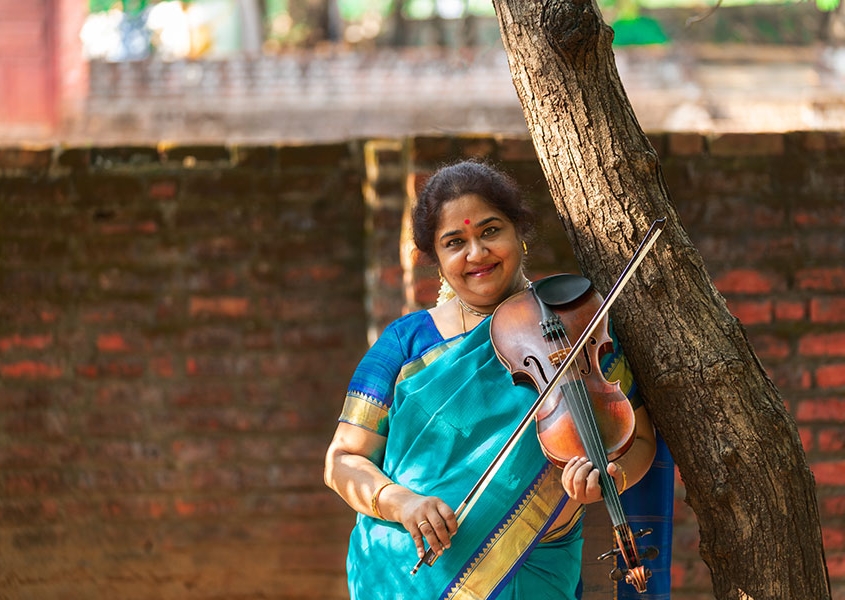 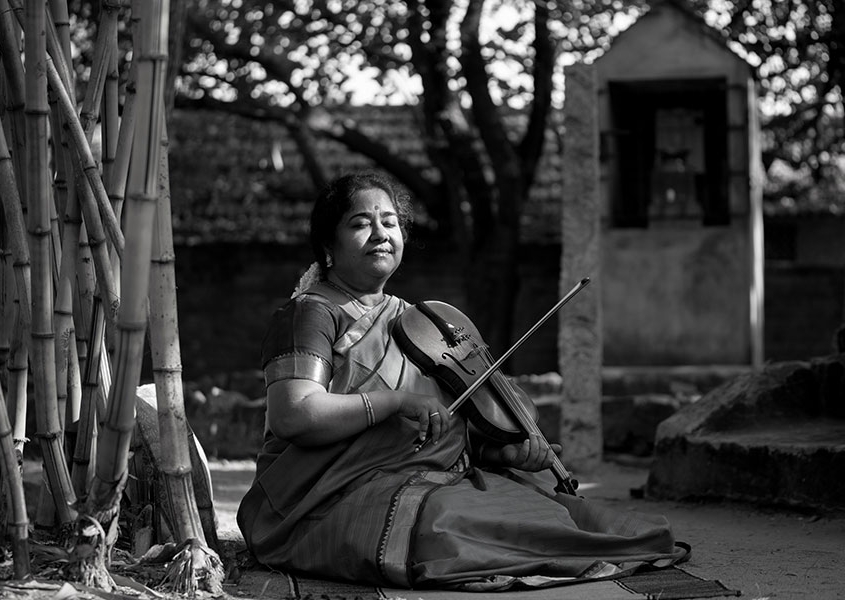 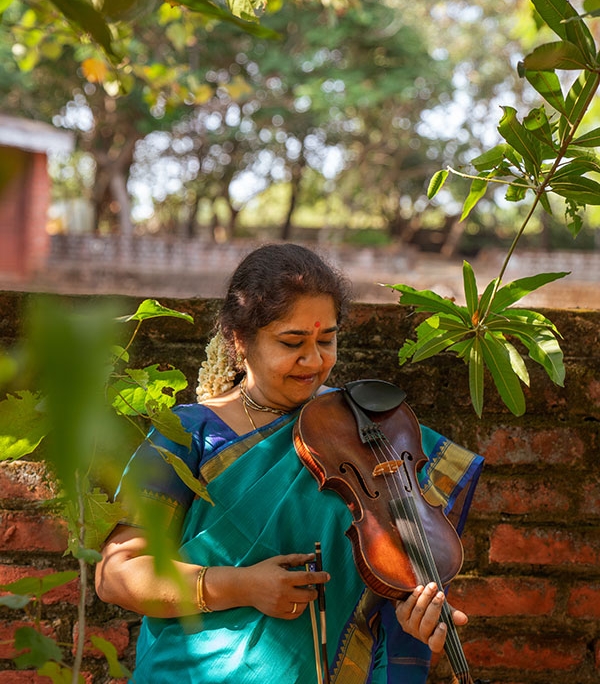 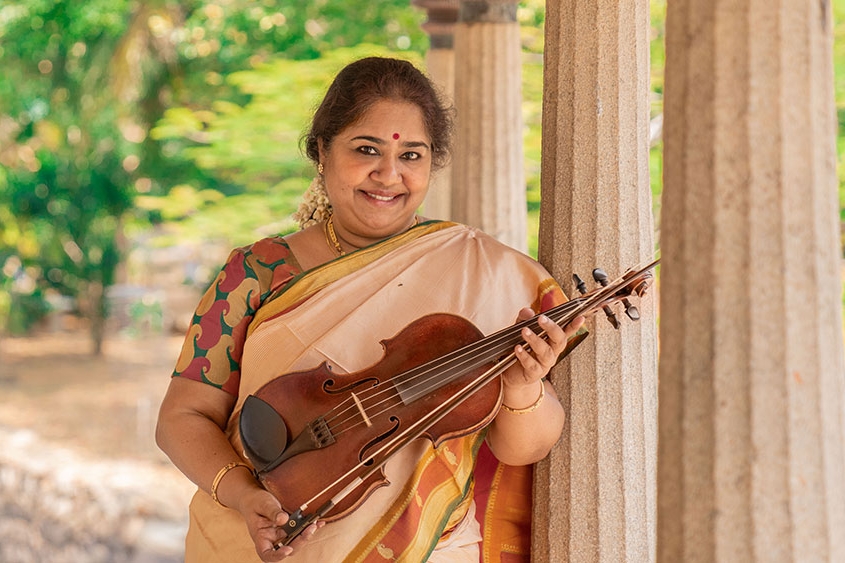 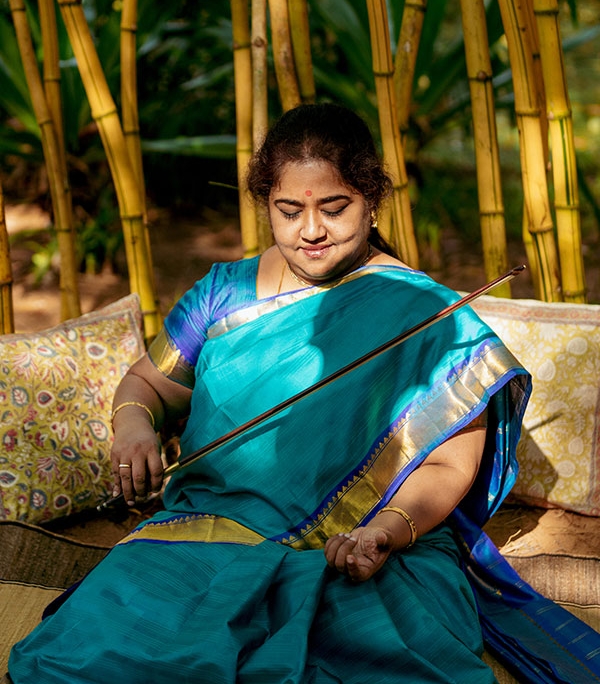 Soulful is a befitting word to describe the music of Lalgudi Vijayalakshmi, a fifth generation musician of the illustrious Lalgudi bani, and an artiste who wears many hats. A violinist par excellence and a vocalist of repute, her performing career is as versatile and varied as her talent; a solo artiste, an alter ego and violin duo partner of her brother Lalgudi GJR Krishnan, a virtuoso with absolute mastery over his music. Vijayalakshmi also provides violin accompaniment to other well-known vocalists and musicians – Sri T. V. Gopalakrishnan, Smt Parassala Ponnammal, Sri O. S. Thiagarajan, Smt. Aruna Sairam, Smt. Sudha Raghunathan, Sri Chitravina Ravikiran, Sri Vijay Siva, Malladi Brothers, Abhishek Raghuram, TNS Krishna to name a few – complementing and enhancing the overall musical experience with her sensitive accompaniment.

Daughter and disciple of legendary maestro, Padma Bhushan, Sri Lalgudi G Jayaraman, Vijayalakshmi’s foray into the world of music was but natural. Born into a household steeped in music and growing up with it as her constant companion, Vijayalakshmi gravitated towards it showing both promise and potential. Even as a toddler, she identified the solfa syllables in any musical phrase that her father sang or played to her. When she turned five, her father, a guru par excellence, became her teacher, initiating her into the world of the violin and allowing her to discover the world of music that he had so inimitably made his own. At thirteen, she made her formal stage debut. Slowly and steadily, one performance after another lead to her blooming as a performance artiste. Just as she stepped out of her teens, Vijayalakshmi came of her own, unfurling to the world an artiste who had the talent and the bent of mind to be able to perform solo, collaborate and share stage space with the menfolk in her home. Quiet and dignified, her music sparkled with a style and character of its own – rooted and resilient, free-flowing and flexible, a coming together of emotions with an abundance of empathy.

In the mid ‘80s, a 30-city tour around North America set off her soulful journey as a performing artiste. There has been no looking back since. With a slew of performances – solos, trios and duets – under her belt, Vijayalakshmi, who holds a degree in English Literature and a Diploma in Music, is counted as a torchbearer of the Lalgudi bani, taking tradition forward without ever compromising its core.

Over the years, Vijayalakshmi has travelled far and wide with her violin and her voice, allowing people across the world – USA, Canada, the UK, Europe, Australia, New Zealand, Malaysia, Singapore, Indonesia Middle East, and Russia – to soak in the magic of her music.

Vijayalakshmi’s vocal performances are perhaps the most authentic vocal representation of the Lalgudi bani. She has released a host of vocal albums as a vocalist.

Vijayalakshmi has also been nominated, jointly with her brother Lalgudi GJR Krishnan, for the most coveted Sangita Kalanidhi award for 2022 by The Music Academy.

If aesthetics are the spine of her music, collaboration and innovation are its everlasting companions, urging her to seek continually, grow and widen her own repertoire. Along the course of her career, Vijayalakshmi has collaborated with musicians from across classical genres and has dabbled in the world of fusion too. She has also had the opportunity of sharing the stage in jugalbandis with her counterparts from the world of Hindustani music – Shahid Parvez (sitar), Debasish Bhattacharya (slide guitar), Kala Ramnath (violin), Murad Ali (sarangi), Pravin Godkhindi (flute) to name a few.

One among her several projects is as the lead artiste for a music ensemble – Violin, Venu (flute) and Veena – a concept pioneered by Sri Lalgudi G Jayaraman across 50 concerts. She holds the distinction of conducting a first-of-its-kind, all-women Violin-Venu-Veena ensemble on a very successful concert tour of the United States performing over 15 concerts. She has also cut a VVV album with Jayanti Kumaresh (veena) and Mala Chandrasekhar (flute).

Inspired by nature, Vijayalakshmi has penned over 100 poems both in English and Tamil on various aspects of nature and music and thereby has won the hearts of many all over the world.

Lalgudi Vijayalakshmi is a composer in her own right, and has to her credit a few thillanas and varnams. In the year 2017, she along with her brother Lalgudi GJR Krishnan composed both lyrics and music for a dance drama ‘SAMBHAVAMI YUGE YUGE’ which was premiered in Cleveland and won the appreciation of many dance exponents.

She is a tunesmith of repute, having tuned many compositions including Adi Sankara’s slokas, Mahakavi Bharathiar’s poems, Kaviyogi Shuddhananda Bharathi’s compositions, and her own poems.

In Sept 2017, Vijayalakshmi successfully staged a thematic presentation called ‘Pancha Bhootham’, in Dallas, USA, for which she composed many orchestral musical pieces, trained over 50 high school children for many months, and performed with these children. The program was a huge success and won great appreciation.

Vijayalakshmi is a teacher with empathy – she loves sharing her music with a diverse set of students, many among whom are readying to take flight on their own in the world of Carnatic music.

A scholar and a presenter across many forums in the country and the world, she has delivered many well-researched and meaningful lectures on various aspects of music, including the music and musicality of the Lalgudi bani.

In 2014, Vijayalakshmi launched Krutagnya (Sanskrit for gratitude), a trust aimed at making music more accessible to the less privileged, creating awareness about varied aspects of music through a series of lectures and workshops, and provide a stage for budding violinists from different schools to showcase their talent.

Krutagnya’s activities include an annual event ‘Violin Vaibhavam’, a day-long event with short concerts by young and upcoming Carnatic violinists from all schools.

It is also her desire to contribute to creating a bridge binding the Carnatic and Western music systems. After all, in her world of music, as far as possibilities in creations and creativity are concerned, both within and around, the sky is the limit.